2. The displacement of a particle is given by x = cos2ωt. The motion is

3. A motor vehicle is moving on a circle with uniform speed. The net acceleration of the vehicle is

4. An object moving is undergoing a non accelerated motion. Its rate of change in momentum is

5. The motion of an electron in presence of a magnetic field is depicted in the figure. 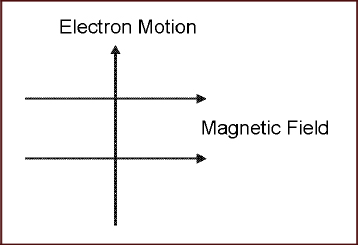 Force acting on the electron will be directed

7. The main thinking part of the brain is

8. Which one among the following hormones stimulates the plant cells to grow in a manner such that the plant appears to be bent towards light?

9. Magnetic Resonance Imaging (MRI) is used in medical diagnosis to obtain image our internal body organs. This is primarily possible because 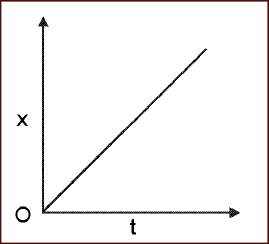 10. The motion of a particle is given by a straight line in the graph given above drawn with displacement (x) and time (t). Which one among the following statements is correct?

11. The human eye is like a camera and hence it contains a system of lens. The eye lens forms

12. Match List I with List II and select the correct answer using the code given below the lists :

13. The Golden Quadrilateral which connects Delhi, Mumbai, Chennai and Kolkata passes through

14. Delhi Mumbai Industrial Corridor connects the political and business capital of India. Arrange the States from highest to lowest in terms of the length of the corridor passing through them

15. Which of the following statements is/are true?

16. A car is moving with a uniform speed. However its momentum is changing. Then the car

18. Which of the following statements about sexual reproduction in flowering plants are correct?

19. The complete digestion of carbohydrates, proteins and fats occurs in

20. Which one among the following statements about a healthy diet is correct?

21. The Nobel Prize in Medicine for the year 2012 has been awarded to John B. Gurdon and Shinya Yamanaka for the discovery that

22. The sex of a newborn baby is determined by the chromosome inherited from

23. Arrange the following events that took place in the first decade of the 20th century in chronological order:

24. Match List I with List II and select the correct answer using the code given below the lists :

Which of the statements given above is/are correct?

26. Two atoms are said to be isotopes if

27. The principle of cleaning by soap is

28. The phenomenon of radioactivity was discovered by

29. Sodium stearate is a salt and is used

30. The pure form of carbon is

31. Which one among the following countries was least affected by the tsunami that hit the Indonesian Ocean on 26th December 2004?

Answer (b). Malaysia reported the least number of deaths among the given countries.

32. Which one among the following statements is not true about Bahadur Shah Jafar II?

Answer (b). Bahadur Shah died in exile on in Rangoon (present day Yangon) in Myanmar.

33. Which one among the following statements is true about Lord Curzon?